Jose Isaac Hernandez was born in Macabebe, Pampanga to Nicolas Anderson Hernandez, a bookkeeper or tinidor de libro for Ayala y Compañia, the precursor of the Ayala Corporation. 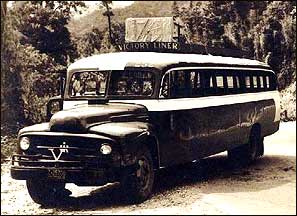 Jose was an entrepreneur with a knack for mechanics.  After the war, he collected spare parts and surplus engines from M-38 jeeps and Chevy trucks abandoned by the US Forces in the Far East (USAFE), intending to assemble a delivery truck for his family‘s rice-corn-vegetables-laundry soap business.  When his design was completed by the Chinese Po Chuan, it was evident that the the low-profile jardinera bus would be best used for transporting people, not merchandise.

Over the years, Jose’s company pioneered the converson of front engine buses to steel bodied, the use of diesel fuel, the use of automatic transmission engines, in-transit entertainment, among many.  Victory Liner is one of the largest provincial bus companies operating in the Philippines today.