Vital personal details on Juan Anderson Hernandez have eluded me since I began my research.  Finding the right documentation is difficult without knowing the dates and places.  But today was another “Eureka!” day for me.  Thanks to the new familysearch.org’s indexed microfilm rolls and streamlined search, I was able to find my great-grandfather’s death certificate, riddled with names, dates and other details previously unknown to our family. 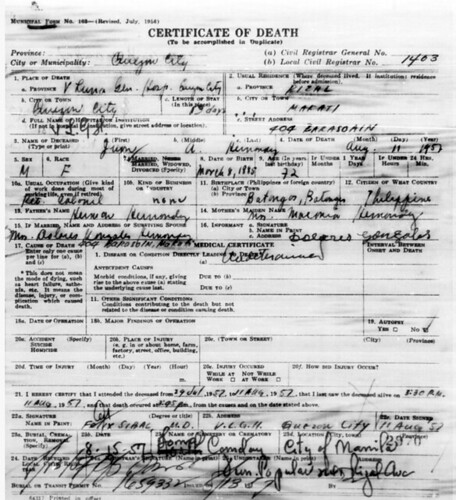 1.  Juan A. Hernandez was born on 8 March 1885 in Batangas, Batangas, according to his death certificate.  This location is not consistent with oral histories and the mini-bio we found here.  From what was previously known to me, he was born in Lipa, Batangas.

2.  His parents were Herman Hernandez and Maria Macaria Hernandez.  According to my aunt, his mother was a woman of American-Mexican descent with the maiden name Anderson.  As Juan was born in 1885 (well before the Spanish-American War which resulted in the influx of Americans into the country), it would be interesting to find out what brought his foreign mother/grandparents to the Philippines.

3.  His last partner was Dolores Gonzales-Hernandez.  They lived in 404 Barasoin St., Makati, which was in the province of Rizal at the time of his death.  Their home is in the south of the Sta. Ana Racetrack where Juan worked as a steward.  Interestingly enough, a street to the north east of the race track was named after him.

4.  According to my dad, Juan left ex-President Quirino’s home on Novaliches to go to V. Luna General Hospital in Quezon City.  He came in for a check-up and accidentally slipped and hit his head, as he was getting off the examination bed.  On the document, we can see Juan was confined on 29 July 1957; and was attended to by Dr. Felix Sibal.  After 19 days of confinement, Juan passed away on 11 August 1957 at 3:45 pm.  He was 72 years old.  While his obituary reads that he died from a heart attack, his death certificate states that the condition directly leading to death is “undetermined”.  No autopsy or investigation followed.

5.  Juan’s wake was at the Funeraria Popular along 2139 Rizal Avenue, Manila.  He was finally laid to rest on 15 August 1957 at the La Loma Cemetery, also called North Cemetery, in the city of Manila.

2 thoughts on “The Search for Juan: Details on the Death Certificate”