I attended a Magno Family event over the week-end; and as expected, I managed to sneak genealogy talk into the conversation.  My Tita Chody mentioned that their paternal grandmother (also her tukayo or namesake), Teodora Sobrepeña-Magno, died in 1969 in Iloilo.  This bit of newly-unearthed information was enough for me to start a targeted search through Iloilo’s records.

I accessed microfilmed death certificates for 1969 and found a lady named LUCIA Sobrepeña-Magno.  She was born in 1886 (Check!  That’s a good match for Teodora) in Mambusao, Capiz.  She died on 10 May 1969 (Check!) in Iloilo of tuberculosis.  Her husband was Ricardo Magno (Check!).   This woman had three crucial items in common with my great-grandmother.  But is she the person I am looking for? 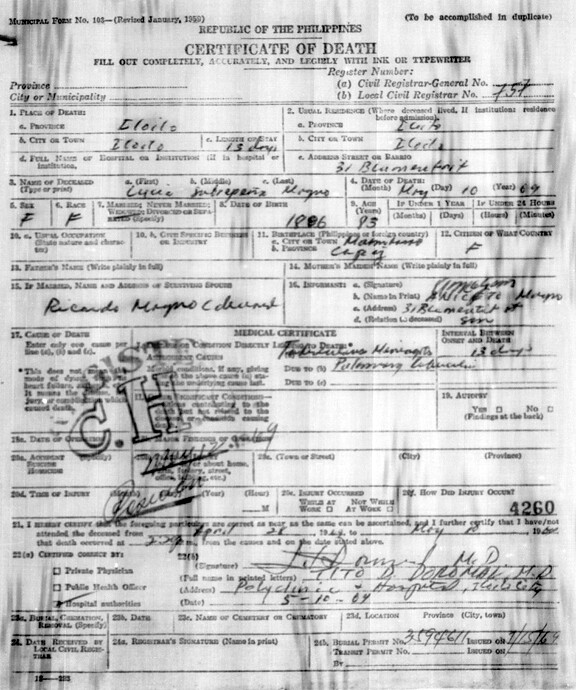 1) It is possible that “Lucia” is one of two given names.

2) Another possibility:  a staff member at the Family History Center in Quezon City also posed that during this woman’s lifetime, it is common for rural people to change their given names mid-life.  This occurs when someone is sickly or is plagued by ill-luck.  They believe that changing their name will bring improved health and happiness.  This was the case with this gentleman’s mother-in-law.

I called my father (the eldest grandchild) and asked about this new first name.  He did not believe it was the same lady as she was addresed as “Lola Doring” until the last decade of her life.  The clincher was the name of the informant.  It was Aniceto Magno, her son.  My father vaguely remembers a story of my great-grandfather having an illegitimate child named Aniceto.  The juicy question that plagues me now, if we go with the illegitimacy angle, is:  Why does the my great-grandmother share a surname with her husband’s mistress?  Were they related?

I was unable to finish the microfilm as it was difficult to read and I was nursing a head ache the size of Utah.  I will have to wait until Tuesday next week to review the records again to get another crack at finding Teodora.

My Tita Inday called her older cousins in Iloilo — they are in their 80s — to ask about Lucia and Aniceto.  It turns out that my great-grandfather, Ricardo, got her wife’s niece (the daughter of Teodora’s brother) pregnant.  While my great-grandmother Teodora remarried (so her last name changed since her husband’s death in the 1930s), Lucia never did (which was why she used her “Magno”).  With the “ew” reflex contained, I am looking forward to a trip to Iloilo to dig up more stories.  I can smell the the unwashed laundry!